Yesterday, I posted about how I plan to solve my plot problems for this year's NaNoWriMo challenge. I wouldn't exactly say I accomplished it, but even small progress is progress just the same.

Today, this is how I decided to solve another one.

Yes, I've posted before about computers I've used for many happy hours writing, and my "regular" desktop and laptop setups are more than satisfactory.

For all but the barest technicality, this Indigo 500mhz iMac G3 running OS 9.1 cannot internet, and therefore will not allow me access to lolcats, Buzzfeed lists, email, or let me zip across wave after wave of Wikipedia surfing in the name of "research."

It can word process, though. It can do that like a champ.

It is just old enough that I can't use it for much except writing, but new enough to directly transfer an intact document file to my regular computer. I'm hoping it will be a distraction buster like my beloved typewriter, but maybe with its own flavor and a little more utility since it affords a modern digital format. Naturally, I'll have a good fountain pen and notebook nearby at all times.

Sometimes solving a problem doesn't mean ripping your guts out and examining what's wrong with you. Sometimes, it is as simple as modifying the environment to accommodate your needs. In this case, I'll always find distractions, but the better I know myself and my habits, the easier it is for me to place obstacles in just the right place to keep myself on task. Take a look around at your own creative space--what works? What doesn't? What works a little too well?

(Well, if you don't count not having a novel idea yet. There's still that.)
Posted by Marisa at 8:23 PM No comments: 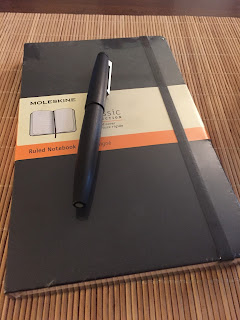 Posted by Marisa at 3:20 PM No comments:

This week I have been sequestered in a Nashville hotel for an ASIST (Assertive Suicide Intervention Skills Training) Train the Trainer conference. It has been a bit grueling. It's a tough subject, and there's a lot to learn, especially the part about being able to adequately help others learn the material. There have been some long days, including this one. I'm sitting in the lobby of the hotel writing this post as I wait for a fellow trainer candidate to return from purchasing note cards so we can go over the material one more time. I'm tired, my back hurts, and I miss my husband and my pets. 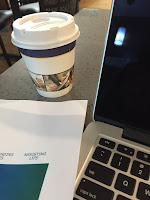 This practice will save lives. Spending this week will allow me to go back to my community and train others to intervene with those who are having thoughts of suicide. Staying late to help my colleague learn material will help him to do the same.

It also doesn't hurt that there is free coffee in the lobby 24/7. Doesn't hurt at all.

I have also been working really hard to eat better and take better care of my health and nutrition (even if it kills me). When my friend Mandy made me an amazing peanut butter pie for my birthday, do you think that even entered my mind? Do you think I felt compromised? Nope.

I've been thinking more and more about the things I do, and what the result of those actions actually is on my life, and the lives of those around me. If I had to guess, I'm probably not alone in needlessly worrying about ALL THE THINGS when it is not going to impact ANY OF THE THINGS. Some of that is just written in the stars, my DNA, the book of life--however you want to put it. Still. I don't have to let that be the boss of me. I can start deciding what deserves dibs on my oh-so-depleted energy reserves by deciding if the outcome of that action is going to impact the world around me in a positive way. Basically, anytime I'm spinning my emotional wheels, I can ask myself that important question: is it worth it?

When it comes to feeling guilty over not spending as much of my time and attention on my writing as I would hope to do if I wasn't so busy these days, it's complicated. I do really believe finding a way to write despite my circumstances has value. Writing is important to me, it enriches my life, and the more I do it, the better at it I will be. The part that doesn't enrich anything is the guilt. It adds nothing. It isn't worth it.

If there's something in your life that is gnawing at your mind or your heart, take a glance to see what effect it is having on your life.

Is it adding to your goals, or distracting you from them?

Is it making your path easier, or harder?

Are you doing something for yourself, or against?

Posted by Marisa at 6:54 PM No comments: