Halloweenie and All Nano Eve

Halloween is here, and it's a pretty important day for a few reasons.

For one--let's be honest here--it's an excuse for candy. LOTS. 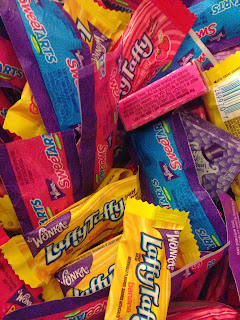 Even on good years my neighborhood doesn't have very many trick-or-treaters, but we always stock up. Always. This year the weather wasn't great so we didn't have any. At least, I'm pretty sure it was the weather. I don't think there's anything about my house that gives us away as greedy candy-hoarders, even if it is true. I was a little sad not to have some trick-or-treaters come by and be adorable on my doorstep, but then I ate some candy and got over it. 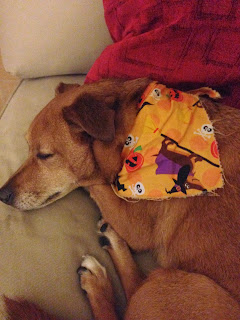 For our dog Bella, Halloween is a most important day. She is the only extrovert in our little family, and every year she sits with wagging tail, just overflowing with excitement to bark at the doorbell and lick the sugar off tiny, costumed hands. This year, they didn't come. She waited and waited, but this year she had to settle for some heavy sighs and consolation petting. At least she got to wear her little wiener-dog Halloween kerchief for a while.

Husband and I cuddled up on the couch next to her to watch our once-a-year Halloween movies, several of which include Tim Curry. At least there was candy.

Probably the most important part of Halloween for me is that Halloween is actually TWO holidays. It is like a holiday in COSTUME.

To a great deal of writerly folks, Halloween is ACTUALLY Nanowrimo Eve.

If you don't know what Nanowrimo is, go here.

I have attempted and completed the Nano challenge every year since 2007. I might have written 50,000 words of various novels in each of those years, but it was not easy. Not at ALL.

Most years, I have some idea of what I'm going to write. It might change along the way--okay, it will PROBABLY change--but I have some kind of clue. This year, I planned to write my first sequel to a previous Nano novel. Unfortunately, my October was so full of busy, I never got a plan together. That's another thing I've learned--you can fly by the seat of your pants through a lot of things, including novels, but not middle books of a three-part series. Those require brain cells and good notes. I have a few of the latter and not nearly enough of the former.

So, once again, I find myself sitting on my couch listening to the "Time Warp" blare from my television, and the only tools I have at my disposal to turn a bunch of words into some kind of art is a notebook and a pen. 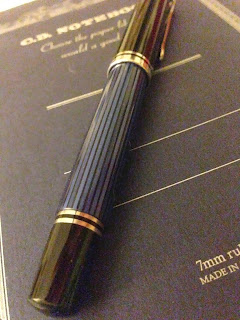 It is a very good notebook and an excellent pen. I hope there are a lot of good words hovering around in one or both of them. Come midnight, we shall see.

At least there is candy.

Inspiration Monday: Among the Porch Lights

Recently Husband and I took an unexpected detour through a rural part of the state. It was late at night and I was tired. My eyes were so itchy and heavy, I would have traded a nice chunk of my bank account for a contact lens case and a cool washcloth. When Husband turned off the interstate past that detour sign, all I could think about was how much longer it would take me to get to my nice soft bed where I could rest my poor back.

Since my only options were to go along with it or get out and walk, I stayed in the car and did what I do best: I stared out the window and daydreamed. (Well...technically it was night, but I was awake. You get the idea.)

We drove for miles down a faded two-lane that cut a scar through a patchwork of vast Tennessee fields. There was nothing but friendly, grass-covered blankness as far as the eye could see (a considerable distance, even with tired eyes in the nighttime). Well, except the cows. I could see plenty of those.

The grass is always greener, and the mountains are always in the way, but I wish I would have paid more attention to how pretty my side of the mountain was before I got so fired-up to climb it.

Eventually, we drove up on a stretch of houses. It was a good thing; I had begun to wonder if the cows had taken over the town. It amused me to picture them going about their daily business as civic-minded townscows, until I thought about what type of rump steak might be cooling in their little freezers.

The houses we passed were pure country, built like run-on sentences with rooms tacked on when they were needed and painted to match. They had porches. All of them. Real porches, for sitting and keeping an eye out for rebellious cows. They were spread out, each house on its own little piece of earth, but close enough that one could say it was a neighborhood. The porch lights were all on, beckoning us down their street like a string of runway lights. I liked them.

I thought about each of the houses we passed in turn. What would it be like to live in that one with the Coca-Cola sign hung by the front door--would I feel blasphemous for drinking a Pepsi? Would I have a little writing nook in the one with the extra room growing off the side like a blister? After a hard day at work, how would it feel to turn that corner and know that yellow door was my own? Would there be one room that is always cold? Does the refrigerator hum? Where would my cats find to hide from each other? Would there be a smooth floor so I could slide in my socks? It was quiet there and sparse--where would I buy my loaves of bread and reams of paper and dog toys? Would there be trick-or-treaters on Halloween? Does everyone have a cow?

I moved in and out of every one of those houses as we passed them by. I lived a quick lifetime in each one and added those memories to my own. (Extra memories are always a plus for a fiction writer.) I was still tired, but not in quite such a hurry to get to my own house. I already knew what it was like to live there.

Inspiration is all around. Everywhere you go, people are living their different-shaped lives: they are stocking their freezers with rump steak, they are driving home the long way, they are leaving the light on for someone they miss to come home to them.

Aren't you curious? Don't you wonder? What do you see under the welcoming glow of a friendly porch light? 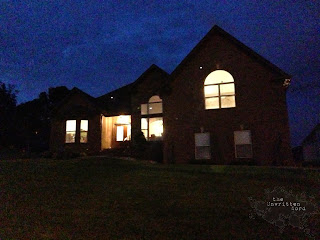 Just watch out for those cows. I'm telling you.

Posted by Marisa at 9:00 PM No comments:

Things I Learned on Blog Hiatus

1. Three animals are better than two. The animals do not necessarily agree.

2. Early episodes of The Simpsons never get old. 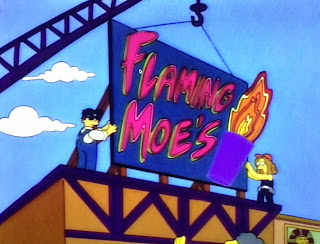 3. Gnocchi are delicious. This was news to me.

4. My friends are amazing and incredibly supportive. I already knew that, but it bears mentioning.

5. I lose my keys an average of four times per week.

6. I still love the Narnia books.

8. SweeTarts are addictive. Even the orange ones.

9. I am biased against orange candy.

10. A lapsed musician is still a musician. My copy of Arban's and I had a reunion party with the whole trumpet family.

12. My body has staked a claim on 2pm as nap-time. There are no exceptions, whether I get to nap or not.

13. The number 13 is not particularly unlucky.

14. Cat hair sticks to everything. Every. Thing.

16. I am starting to like pink. The ghost of my teenage-self is very upset by this.


17. When I am nervous, I forget how to spell (among other things).

18. Watching my husband shop for clothes is adorable. He hates it, and that just makes it more adorable.

20. According to my eye doctor, I have beautiful corneas. Well, thank you. I try.

21. I still have my lucky pencil. I got it nearly ten years ago when my college band director went around the jazz band docking grades for anyone who didn't have one. I found it on the floor just before my turn and it has lived in my Bb trumpet case ever since.


22. I had to add one more because I cannot in good conscience leave a list with an odd number.
Posted by Marisa at 10:09 PM 1 comment: