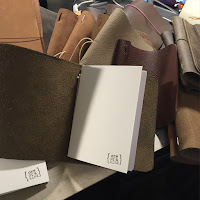 Today I am crawling out of my weekend cave, putting on outside pants, and heading over to show off some of my handmade books at the East Buntyn Art Walk here in the grand city of Memphis. I art a lot, and I walk a good bit, but I've rarely combined the two.

Hey, it seems like a winning combination to me!

I'm hoping to find some new homes for some of my books, because I am running out of room in my house to store them and I have a strong hankering to make more. If you're local, come join me. If you're not, but you want to take some of these things off my hands, email me.

Here's hoping for a beautiful day, some time to scribble a few words in my own notebook, and for lots of fellowship with some fantastic local artists. 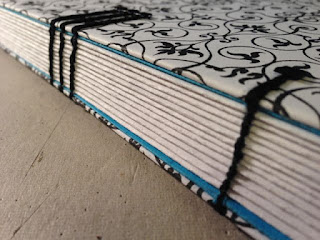 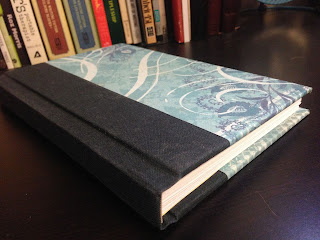 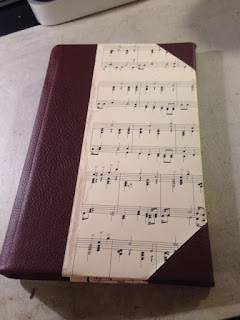 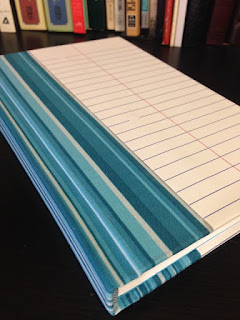 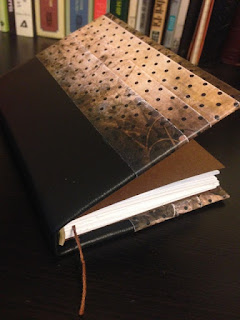 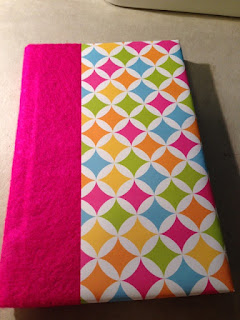 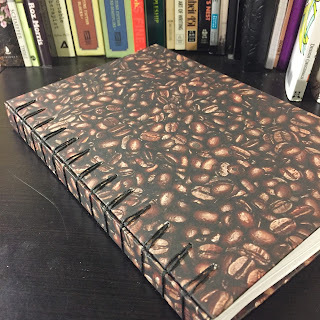 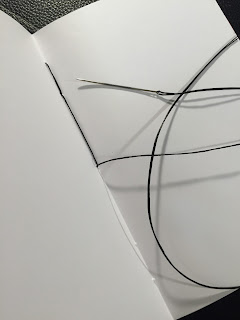 Posted by Marisa at 9:49 AM No comments:

As I mentioned in my last post, I recently attended the Arkansas Pen Show as a vendor for the first time to sell find new homes for some of my handbound books. It was a wonderful experience for a number of reasons, but not least that my friend and I had the best table-neighbors possible for vending a show. We were placed next to Shawn and Elizabeth Newton of Newton Pens. There was much interesting discussion about art, craftsmanship, writing and tools thereof, superheroes, Maniac Magee (which I promptly re-read and love more than ever), and lots of other random things. There was no way I was walking out of there without finally owning one of Shawn's custom, hand-turned fountain pens.

Choosing just the right pen was nearly impossible. I hemmed and hawed over his incredible selection, chewing my lip as I fought back another wave of frustrated indecision.

Okay, I'm totally lying. If I had allowed myself to actually do more than sneak a side-glance at his table, that is what would have happened, but I didn't let it. I couldn't let my eye wander over there, because (thanks to Shawn's amazing pictures on social media), I had already promised my love (and my money) to one of his pens in particular:


Shawn has made pens from this material before for other customers, and from the first time I saw it, I was sold. The color is gorgeous--soothing and mild, but with an icy vibrancy in the veining. When writing with it, I catch myself just stopping to look at it, enjoying the way the swirls bend and swoop in the walls of the pen, adding the illusion of mass suspended in weightlessness. 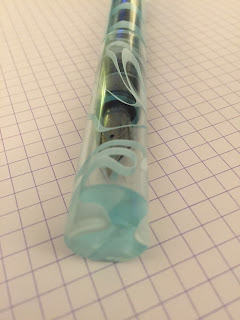 Basically, that's a lot of fluffy wine-tasting talk to say, "It's purty. Like, really." The light was not kind when I tried to take a few quick shots of the pen to add to this post, but there are some much better pictures on the Newton Pens site. (While you're there, go ahead and click the Newton Pens Scholarship tab. It is such a cool program!) 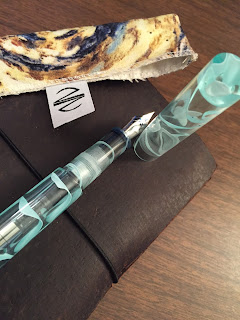 As soon as I entered the room to set up for the show, I was like, "HiShawngimmemypenpleasepleasehurrykthanks," because I didn't want anyone else making me have to fight them for it. When I finally had it in my clutches (along with a custom pen sleeve in the coolest geek-cred fabric made by Elizabeth Newton), I immediately had the strongest urge to go hide in a quiet room and write an entire novel. Unfortunately, since I had two days of selling books to do, I had to sit and stare at it until after the show when I would have time to put some miles on it.

It has some miles on it now.

First, I want to talk about the quality of the craftsmanship. This pen doesn't feel like any other pen in my collection. It wouldn't--it's completely unique, made by hand. That said, I dare you to find a flaw. It has been polished to incredible smoothness inside and out. It has been turned with meticulous care and consistency, for any variations of material thickness or machining technique would be fairly obvious in this, a clear pen. The form factor suits it so well: a simple, straight cylinder with flush cap and barrel. It allows the material to take center stage. The cap and barrel threads are tight, so the cap stays in place securely when the pen is closed. The tolerance between cap and barrel when closed is nearly seamless. It is not possible to post this pen given the shape, but the length is significant, similar to a Pelikan m1000, and should be sufficient for any size hands. Likewise, the pen is light enough to hold in quite dainty hands, even though it is of substantial size. 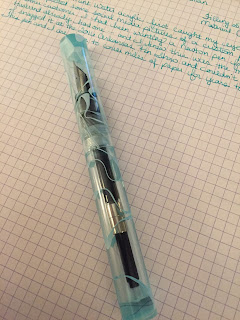 The filling mechanism is cartridge/converter, and it came included with a nice standard-international converter (and a fill of Waterman blue-black). It is also possible, with the addition of a smear of silicone grease on the threads, to use this pen as an eyedropper-filled pen. (Here's more information from Fountain Pen Revolution if you're not familiar with eyedropper-filled pens.) I bought a brand new bottle of Diamine Soft Mint (J. Herbin Diabolo Menthe would also work) just for this purpose. 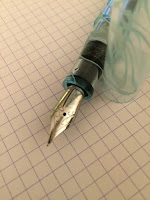 I chose an extra-fine steel nib for the pen. Shawn now works with a partner who is creating custom gold nibs for his pens, but he also sources good-quality Jowo nibs, which can be found on several well-known manufacturers' pens. Personally, I'm a fan of the Jowo nibs, and I've rarely used a poor one. This nib is no exception, providing a relatively smooth writing experience with a moderate amount of pleasant feedback. (I consider some feedback, or paper-feel, very pleasant when writing. If you prefer a mirror-smooth writing experience, I might direct you to a broader nib. It's rare to find that quality in even the best fine and extra-fine nibs.)

As a crafts-woman myself, few things make me happier than supporting my fellow artists. This pen will remain a special part of my collection, not just because I love how it looks and how it writes (I do!), but because I know what it is to make something with my hands and the guts it takes to share that with others.

I write reviews like this and keep a "Tools of the Trade" portion of this blog specifically because I believe it is important to understand and find affection for the tools that make our endeavors not just possible in a minimal way, but truly enjoyable. I appreciate this pen like I appreciate other tools, and I love it like any number of other nice things I've been blessed to own. However, more than either of those things, I respect it and the hands that made it.

May all that care, attention, and passion infuse every piece I write with it.

This weekend my friend Derek and I have taken the plunge and set up shop to sell some of our journal handi-work at the Arkansas Pen Show. I've been to the show in years past...and I usually leave with a pen or two, yes...but this year we are on the other side of the table. 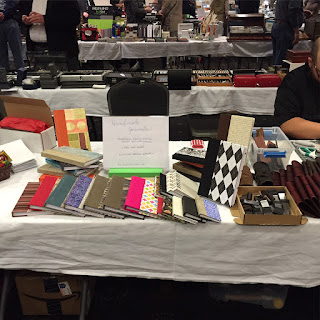 I have enjoyed getting to meet so many interesting people with whom I share interests: fine writing tools, art, craftsmanship, and writing. I must admit, I have also enjoyed the experience of having people come and hold my handbound journals, flip through their pages, and think through how they would put them to use. That is a big thing for me--I do hope they will be used. Though I spend much time building the books to be as perfect as they can be, I secretly hope they will cross my path again, just for a glimpse, so I can see them with their pages full to bursting, their corners bumped and frayed, and their bindings limbered by use. 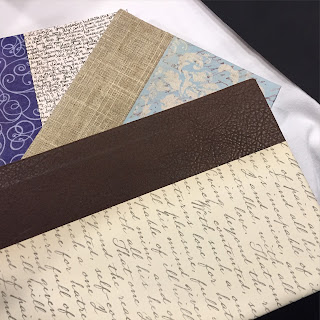 I've enjoyed this, hermit though I am, and I'm thrilled to share my art with people whom I hope will love it the way I do.

Oh, dear blog, I have not forsaken you! I have been a busy bee the last few months, and so many times I thought to settle myself down to type out an update: something intriguing that crossed my path, enthusiasm for writing tools and books, and some random pictures of my dog (because she's adorable, darn it. I'm doing it anyway.)

There are myriad reasons I didn't follow through, and most of them are why I haven't settled myself down much in front of my novels or stories, my sketchbook, or even my towering as-yet-unfinished reading pile. The biggest reason I've got is that my days have grown heavy, and I'm weary from the toil.

There's literal toil, of course. I've written much about my job, and more than I write about it, I think about it, feel my way through it, and keep on doing it. I love it, I'm grateful for it, and I hope to get better and better at it as I go. That takes a mighty bite out of me some days though. 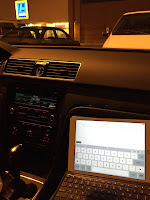 I haven't been writing as much as I want, as I said, but I did make it through Nanowrimo with a few days to spare. That was mostly due to the fact that Husband was willing to drive me around with my iPad in my lap while we ran errands. Someday I might actually open the novel file again and actually see what I wrote, but that day is likely a long, long time away.

I've also been working more on myself--including going to the gym. If you know me, you know this is as pleasant to me as a cow wandering into a butcher shop and volunteering to become a big pile of steaks. I've been incredibly grateful for the support of fitter-than-me friends who reassure me that exercise didn't kill them, and most likely won't kill me. I mostly believe it. Mostly. 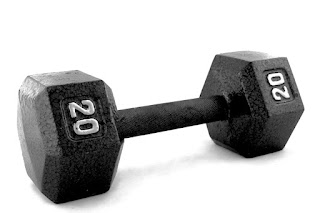 Those things have eaten up my time, but there's more to what has eaten up my mind. There are a lot of heavy things dragging on my heart these days. Loss, and the shadow of it on the horizon, hovers. Wherever life is involved, it has always been there, and always will be. When the time comes that it commands our attention, there's no avoiding it.

Today, my Monday is feeling heavy, and that's the inspiration for it: the heavy days, as much as our light and joyful ones, are just as worthy of our notice. It is part of the road we all travel, and wherever your feet may fall on the journey, there's still much to teach and to learn, gratitude and goodness to share, and strength we don't yet know we have.