As much a writing enthusiast as I am, I had not heard much about Callifolio inks until recently. They're manufactured by L'artisan Pastellier, a French ink and calligraphy tool producer, and have had a good reputation amongst the lucky few who were able to try them over the last several years. They've been notoriously hard to source in the U.S, but not anymore. 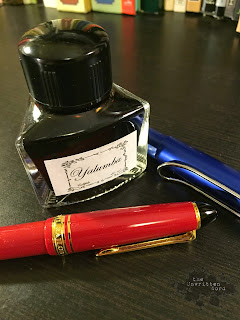 Vanness Pens is carving a niche sourcing hard-to-get international inks and making them available to the American market. Callifolio is the latest to crawl ashore and pick up citizenship on their vast ink shelf. Vanness graciously provided me this ink in exchange for an honest review. Since I don't know how to do them any other way, I was happy to oblige. 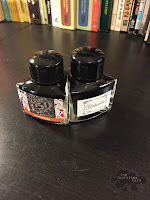 The first thing I noticed about the ink was that it is in the exact same bottle as the Diamine 150th Anniversary inks. I opened up the bottle of Yalumba and saw instantly a similarity to Diamine Terracotta, a standout from the Diamine 150th Anniversary set. I wondered if maybe it was a rebottled Diamine ink, since Diamine has been known to allow retailers to relabel their inks. I checked them out side by side and saw that while they're part of a similar color family, they're definitely not the same ink. From what I've been able to glean about L'artisan Pastellier, they take pride in formulating their own inks, which they state are Ph neutral and ideal for fountain pens.


I would say right away that I would not fear putting this ink in an expensive pen. It is not highly saturated, and doesn't cling to plastic or metal. It knows what it is there to do, and does so with little fuss. I do like that in an ink (though sometimes the fussy ones are worth it). 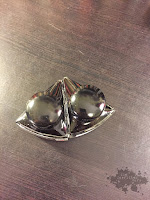 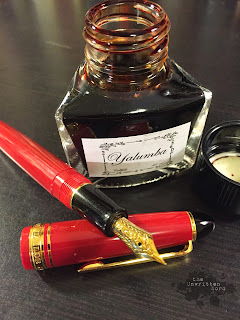 I started out writing with my Sailor 1911s with H-MF nib. The Sailor has a very rigid, fine nib with a small sweet-spot that can seem to be scratchy at first if you're not accustomed to it. Even with my overwhelmingly positive relationship with this pen and the miles of paper we've covered together, I couldn't shake the scratchy feeling. The ink is very thin and doesn't give much cushion to ride on. I am not blaming the pen--I imagine any fine nib you use will have similar results. The ink itself appeared to be rather light and unsaturated, but I was pleased to see that it went down legibly even in such a fine nib.

I switched to my Lamy Al-Star with medium nib. This is an exceptionally smooth, cooperative German medium nib, which is significantly broader than the Japanese medium-fine I had been using on the Sailor. Right away, I experienced a much cushier ride. The broader nib also gave the ink a chance to show off its superpower: shading.

I really enjoy the color of this ink, which is somewhere between a brown and an amber, but part of the fun of a lighter color is the shading that can be developed to add character to your writing. This ink has character in spades, and I'm looking forward to trying it out in a flex nib. I have a feeling it will be stunning (though my unskilled flex lettering will leave much to be desired).

Check out my handwritten review of this cool boutique ink, and if you like what you see, you can find many more like it at Vanness Pens.

Posted by Marisa at 8:57 PM No comments:

Inspiration Monday: It's Just a Habit

Once again, I find myself apologizing for being away from the blog. I'm starting to think this has become a habit.

I've been thinking a lot about habits lately, especially as I am currently developing some new ones and shedding some old ones.

For one, I changed jobs a few weeks ago. It wasn't a sudden change--it was well-planned, expected, and full of goodwill. I'm still working with people experiencing homelessness, a population I care deeply about. Instead of working on the housing side, I'm now directing a program centered on mental health supportive services. I'm working for a community mental health center with whose staff I have collaborated for years with numerous shared clients. Long before I took this job, I knew that lobby like it was my own bedroom: where the most comfortable waiting chairs were, the best time to arrive to keep from having to wait too long for the lab, and that The Price is Right and Let's Make a Deal, always on the waiting room TV, make good conversation fodder to keep waiting clients from getting too antsy.

As comfortable as I was with the center, I didn't know how much I didn't know. Even transitioning into a job you already know how to do at a place you are already familiar comes with some new territory. There are the things all new jobs come with--new people, new rules, designated parking spaces, and new workspace. Then there are the things you don't think about before you make the switch, the million little habits you will find yourself making anew, and all the ones you end up breaking cold turkey.

My first week, I drove to work a different way every day. I bobbed and weaved my way through so many different roadways looking for the fastest, most efficient route I started to feel like I was playing a really boring edition of Grand Theft Auto: Commute or Die. I learned one thing on my attempt to carve myself a new rut in which to carry myself to work everyday: Memphis traffic is a strategy game that cannot be won. A few times, I caught myself "homing pigeoning" and getting onto the interstate at the same place I used to for my old job. It was just second nature, and depending on the amount of coffee in my system, a harder habit to break than I would have reckoned.

I eventually found what I would call "the path of least resistance," but it took a while before it was really comfortable. After a while, the landmarks weren't so weird anymore. The signs were familiar, the lane changes expected, and some fellow commuter cars recognized. I found a new pack to run with.

Of course, getting to work is only half the battle. There are a million new habits to forge once in the office. It took a while to stop reaching in the wrong drawer for my stapler, and to get used to the new squeak of my desk chair. I found myself carving out times when I could beat everyone to the microwave at lunch, and to avoid peak times at the restrooms. I noticed myself making new habit after new habit, finding comfort in the turning of new to old. Likewise, I've visited my former office a few times to staff cases with my former colleagues, and I was surprised to find that even when it felt so much water had flowed under our bridges, I sunk right back into the rhythm there.

It is human nature to develop routines and habits in our homes and in our jobs. They carve their way into our behavior,  silently at first. Sometimes they bring comfort and the certainty of safe passage. Then, when they get near the bone, they can ache a little.

The patterns we create are part of what it is to live and interact with the world around us. Writers and artists need their favorite tools, their favorite spots, their go-to music and muses in order to create. Routine is often the friend of hard work, and creative work benefits from structured practice as much as anything else. Likewise, the creations themselves benefit from the structure of the world around it, either as context or something to riff on. If you're writing a character whose life is nothing but routine, it's probably smothering him or her to death. Break the mold, shake them up, and watch them navigate the transition. If things are already topsy-turvy in his or her world, look for the little anchors that would realistically crop up--is it that he or she uses the same bathroom stall every time, even in the midst of great angst? That he or she notices what time the coffee runs out at the office? Maybe it's just noticing that they see the same gray car at the same intersection twice a day. Even if these mundane details don't make it into the text, as always, it is these things that inform your writing backstage, and that allow your characters to come to life when the curtain is up.
Posted by Marisa at 10:56 PM 2 comments: