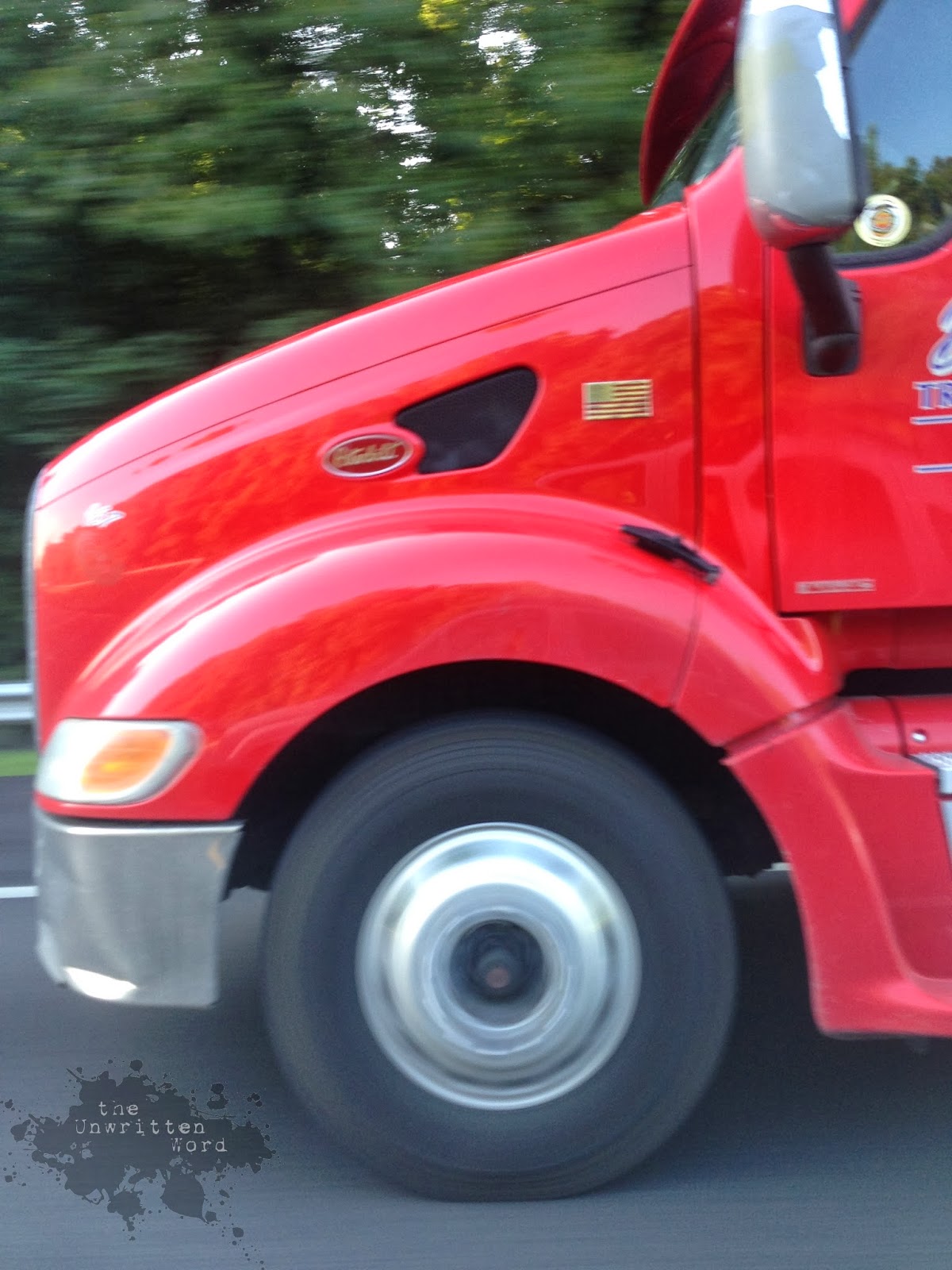 "Keep on Truckin'." We throw that around a lot, and we know what we mean. When the going gets tough, keep on going. You can't get much simpler than that.

I've said this phrase a lot lately (and had it said to me), so it got me thinking about how such a phrase became part of our everyday vernacular.

When I'm out driving on the interstate, I do think about the big trucks and the people who drive them. Much of the time, I'm trying to avoid being stuck beside them because, courtesy of my overactive imagination, I can just see my car getting swept up by one of those huge tires, leaving me and my car on the side of the road like a crumpled tissue. If cars were dinosaurs, a big rig would be a T-Rex and my Nissan would be something little and cute, like a prehistoric turtle. I'm not betting with those odds.

I also think about the people driving those trucks and what it would be like to have their job. It's a hard one, no doubt. Lonely, monotonous, exhausting, and a little dangerous. I imagine that sometimes life would feel a little surreal, since people in the transport industry definitely have to play fast and loose with time and space. You can't make a hot meal, you're stuck eating what you can find on your route. You can't curl up in your bed with your spouse, you have to crash in the sleeper or, if there's time, grab a quick night's sleep in a strange motel bed.

I can see some romance in it though. I would miss Husband way too much to ever hit the road like that without him, but the idea of driving on and on, all alone with my thoughts, is kind of appealing. There is so much to see in the world, and I keep saying I'll get out there to see it one of these days, but I never have the time. If this was my job, that is all I would have: time to drive and look and think. Interstate just looks like interstate, but there is life happening just off the sides, always.

I guess it is the illusion of freedom that appeals to me, but I am smart enough to know that it is just that: an illusion. That is why we say, "Keep on truckin'," after all. No matter what happens, they have to get where they're going, intact, and do it on time.

I could see a story in that. Maybe you can, too. Imagine you're the one in the driver's seat. You're high off the ground, the biggest thing on the road. You're controlled; you have to be. Those tiny cars just keep zooming around you like a swarm of gnats, and it is your job not to squish them. You're tired, your eyes are dry. There's a cramp in your neck. The cab of the truck smells like onions. You want a hot shower in your very own bathroom more than just about anything, but there's no use worrying about that. You've got a job to do.

Your trailer is special. This isn't just another load of Florida oranges coming up for a high school fundraising sale. This load, you're told, means something. You don't know what it is, and the boss isn't telling you. The rig is locked tight with a special combination lock, and you don't have the code. Whatever this is, it has to reach its destination, and it has to be there on time. They're waiting.

This is not a smooth run. You've lost a re-tread and your gas gauge doesn't seem to be working right. You hit a familiar truck stop to refuel, only to find it closed and boarded up. Then there's something about the way that State Trooper is tailing you that you just don't like.

What's in the truck? Why is it so important? Where are you going? Where have you been? What's with all the bad luck, and is there a reason for it? Why does the cab smell like onions? Fill in the blanks and see where it takes you. Just make sure you reach your destination on time.

Posted by Marisa at 8:49 PM No comments:

Sometimes, you just want an ink that makes a statement.

When that mood hits you, this is your ink: 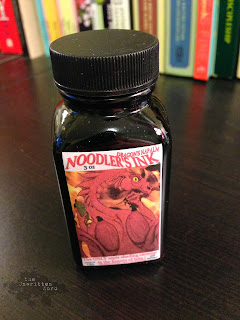 When you hear a name like "Dragon's Napalm" you should already be prepared for an intense, unique color. This ink definitely delivers in that aspect.

The man behind Noodler's Inks, Nathan Tardiff, has stated that he wanted to capture the unique color of Mercurochrome, a popular antiseptic in the 70's and 80's, known for the fluorescent red/orange stain it applied to everything it touched.

This is the real deal:
And this is Dragon's Napalm: 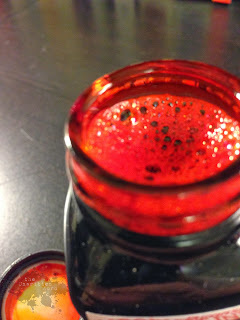 I'm a little too young to remember ever having used Mercurochrome, as it was already falling out of fashion in my youth due to concerns about its mercury content, but there is no denying that it is a unique, vibrant color that probably invokes memories for a lot of people.

Personally, I went after this ink because I wanted something fun to write with when I felt I needed a little pick-me-up. Sometimes a little novelty goes a long way with me. Anyway, this ink doesn't get to come out of its cave too often, but when it does, I really enjoy it. 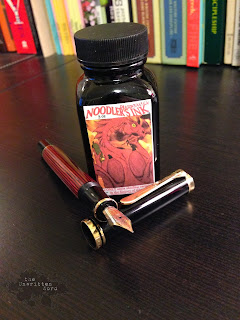 I haven't noticed it staining any of my pens yet, but I don't know if that is because it isn't as stain-prone as I would think given the high dye content and color, or if I have just confined it to pens that are pretty resistant to staining anyway. Noodler's inks are a polarizing topic in the fountain pen community since some of the zany ideas that work their way out of those Noodler's bottles can be a little finicky if you aren't sure what you're getting into. Personally, I'm a Noodler's fan and use their inks widely. That said, this is one I handle with care, much like Noodler's Baystate Blue (which is about as controversial as the Affordable Healthcare Act). I haven't actually had any reason to believe this ink would harm a pen--repeat, it has never harmed any of the pens I've used, including my husband's beloved Pelikan m800--but I do tend to confine it to pens I know I can take apart and clean easily and ones I do not believe will conspicuously stain. I do not have to be burned by a dragon to know that fire is hot.

I have to admit, I long to see this ink sitting in a clear demonstrator, like my TWSBI Diamond 540. That color can really wake you up, and I think it would be fun to see it sloshing around in a crystal clear pen.

As for performance, this ink is on the dry side. I tend to like the smoother feel you get from more lubricated inks, but dry inks are not inherently bad. If you use finer nibs, you might notice a little more scratch when you write than with some other inks, but it is not a deal-breaker. Dry inks do tend to make me a little paranoid that my pen is going to clog, so that is sometimes a distraction for me.

This ink is certainly dark and clear enough to use for regular writing, though you might want to put on sunglasses if you're reading back a full page. It is also great contrast ink, and I can see myself reaching for it to underline or edit. You would certainly not miss any margin notes written in this stuff.

This ink is so hard to photograph. I did the best I could with the review, so hopefully it is close enough to give you an idea. Probably not, though. This stuff really burns out your eyeballs in person. 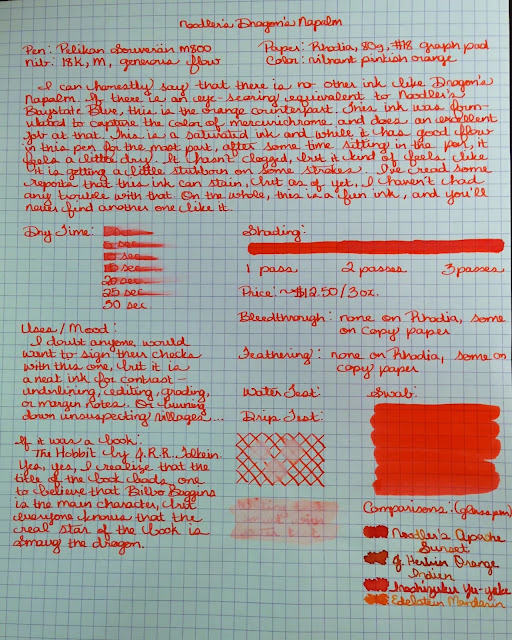 This ink is pretty magical stuff. If you're suffering from a case of the writing blahs, Dragon's Napalm will cure them. If you don't believe me, check out this Youtube video from NoodlersFan:

Posted by Marisa at 7:29 PM No comments: