A Pause for Peace

I've had a busy couple of weeks which have left me with little time or energy to string together even a handful of coherent sentences for the blog, but in the midst of troubled times, I wanted to at least poke my head in to offer a little bit of encouragement. Tonight, I'm going to write and I'm going to take the emotions swirling around inside--and there are many--and I'm going to paint up some paper with truth, at least some twisted amalgamation of truth as it occurs to me. Whether or not it becomes literature remains to be seen, but it will be honest and it will be art and it will be mine.

If you're like me and your voice doesn't always come out right unless it's dripping through a pen, spend some time taking stock of the world you live in and write it right. Take the broken and mend it. Take the lost and find it. Take the darkness and flip on the lights. Don't avoid the harsh truths of reality--repair them.

You might just find that it is the little choices that little people make every day that could be shifted to create big change in the long run. It is not the breast-beating for Peace way off in a capitol somewhere that will fix this world. It is going to take a purposeful epidemic of tiny peaces from all of us that will ever reconcile the souls harboring on this rock.

Love each other, and not just in times of tragedy.

Because it is awesome and because it is timely and a quiet, silky writing tune, give a listen to Pink Floyd's "On the Turning Away."  Food for thought.

Posted by Marisa at 9:32 PM No comments:

Back in the Saddle 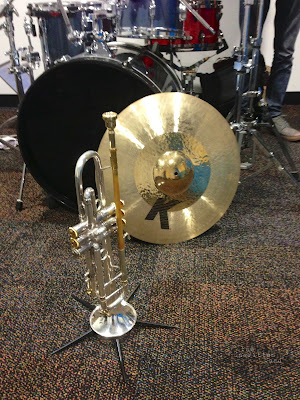 Last night, I blew the dust off my trumpet case for the first time since my dental adventures began and I hauled my carcass to a rehearsal. This rehearsal was filled with actual musicians with actual musical abilities and the sounds that they made were emphatically, undeniably musical.

However! I kept the horn on my face the whole time and some of the notes I played pricked my memory and waggled their little fingers at me: "Don't you remember? We used to do this all the time. We were a team, and sometimes when the moon was full, we were good. Together, we were the music."

Regardless of what actually came out of the bell, my mind swished around the old notes, the ones from before that were sweet and full and brilliant. Before long, I was drunk with it, swept right back into the way it used to be when my horn and I spent every day together, back when we were the music.


It got me thinking about some of the people who have experienced homelessness that I have had the privilege of working with over the last few years. Some of them survived on the streets like stray animals for decades, longer than the scant three I've been on the earth, and they did it without fanfare, without certificates and trophies emblazoned with "Best at Staying Alive", without so much as a blink from passersby. I'm willing to bet that every single day of that time, at least one stray thought took them back to before, when they didn't have to ask permission to do the simplest, unavoidable things, like go to the bathroom (and be turned down). No doubt they thought about the times when they were called "sir" or "ma'am" by store clerks instead of "shoplifter" or "suspicious" just for how they happened to be dressed (which, again, they don't have a whole lot of choice in). For some of them, they could look down at their hands or rumble up a hum in their throats to remember a time when they were the music, too.

I salute everyone who has ever taken a dive over the side of their horse for one reason or another, and had the guts to put their foot back in the stirrup, swing over their leg, and settle back in that saddle.

None of us would get very far without a few second chances and a little patience from the good hearts of the other musicians in the room, the ones who know that we've been where they are, and that tables (as tables are apt to do) could turn at any moment.
Posted by Marisa at 6:17 PM No comments:

If you couldn't tell, I'm pretty excited that today was a nice day. Nice enough that I tossed my jacket into the trunk of my car and didn't think twice about it all day. Nice enough that I stood in a parking lot leaning on my dirty car, pockets heavy with post-it notes and lists, and I closed my eyes. I pretended for a second that the cars passing by were really the whoosh of waves, and the coolness in the breeze had been born on the sea. My feet were cozy in their shoes and couldn't tell the difference between sand and pavement, so I lied to them. I told them that soon I would dig them into their favorite place, the wet, mushy place where surf and shore are the same thing.

I wasn't really sure what to make of the sirens in the distance or the uniquely oily blacktop smell, but whatever.

My little vacation did what it needed to. I got back into my car and followed the post-it-notes where they led me, but I did it looking in the rear-view mirror at Old Man Winter waving bye-bye for three long seasons more.

I'm a nut for spring--it's my favorite season by far--but I found myself a little nostalgic for the lonely beauty that only winter brings. Winter is all about the insides: trees shiver in their bare bones and the chill runs us all indoors where the frost on the windows takes the rest of the world away.

I've got to respect a season that turns us inward on some level, even if just to get a satisfying bellyful of hot chocolate and to daydream about the beach. Winter gives us a chance to appreciate what we've taken for granted beneath the beautiful, temporary snowflakes.

Now that spring is here and winter is fading into the distance, spare a few creative thoughts to give its due. It is the one season that asks us all to slow down just a bit, and though I despise being cold and scraping ice off my poor, dirty car almost as much as going to the dentist (where I am always cold), I think that's a trait worthy of praise.
Posted by Marisa at 10:14 PM No comments: