Standing on the Shoulders of Giants

I read an article in The Wall Street Journal a few years ago* by novelist Paul Theroux in which he described his creative process. He mentioned that writing by hand is a crucial part of his writing process (and he always uses a Lamy pen on good-quality Docket Diamond paper). In that article, he quoted Hamish Hamilton who would often praise writers' handwriting, stating, "He has a good fist." Mr. Theroux went on to state that he was once approached by a budding novelist who asked his advice on how to improve her work. He quickly told her that she needed to go back and copy the first fifty pages of her novel by hand. She asked, "Can I do it on the computer?" Mr. Theroux did not chuck her into the sea, but explained no, she needed to write her words by hand so she could study them, and that typing is vastly different than actual writing. In the end, the woman did not take his advice. Mr. Theroux said he knew it would have helped because he "would have been able to see her 'fist' in it." 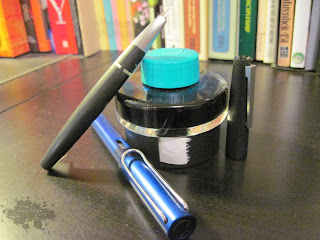 I've read other articles that suggest taking Mr. Theroux's advice another step further. If handwriting can light up our creative neural pathways and open doors into our own writing, then it naturally follows that a positive practice effect can be achieved by handwriting copies of works we admire. Basically, if I want to learn to turn a phrase like Steinbeck or draw a setting like Hemingway, I can learn how it feels to do so by copying the places they did those things well. It is a way to marinate our brains in someone else's good words so that eventually, when we are writing our own work, we will recognize the cadence, the look on the page, and the feel in the hand. Then we will know when our own words are good, too.

I learned of this technique a good while ago. I thought it was a good idea, and I meant to try it. I have written miles of pages since then, much of it morning grumbles about how I always want another cup of coffee, but I had never taken up my pen to try it out. I guess I am so hardwired against plagiarism that copying someone else's work seemed out-of-bounds, even for practice.

Since I have been sick and operating on half a brain, I figured it was as good a time as any to give it a try.

Like with most good advice, it turns out it was effective, and actually a good bit of fun.

I started with a handful of nearby books I have read and admired for one thing or another. After I did the handwriting sample, I did a little slab of analysis on what I learned. 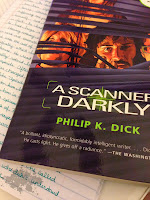 I have long loved Philip K. Dick. I appreciate his work for his madness as much as his imagination, his sensitivity as much as his bravado. A Scanner Darkly is unique among the PKD novels and stories I've read, and I was glad to get my finger on what makes it tick. The first thing I noticed was that his sentences are actually straightforward and simple, unfolding one idea straight to the next like a set of Russian nesting dolls. He's not big on commas, either for connection or pause. He uses them appropriately, but not for fun. It adds to the straightforward style and voice. This works well, given the way PKD's works tangle themselves up in complexity and confusion as they go along. If his writing got in his way, it would be hopeless to follow.

Watership Down by Richard Adams 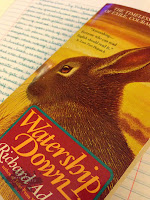 Watership Down has long been heralded a classic, not just for its story, but for the creative, sensitive handling of writing from the perspective of a rabbit. Richard Adams gives his readers an experience they couldn't have any other way, and he does it in three dimensions. In the sample I copied, Adams takes his time drawing the setting and ambiance. I could feel it in the words themselves and the long, languid sentences. There was such an emphasis on all the trees and grasses, I almost sneezed just writing it. It gets the job done setting the world at a rabbit's eye view, and his lush writing mirrors the lushness he is trying his best to get his readers to see with him.


The Old Man and the Sea by Ernest Hemingway 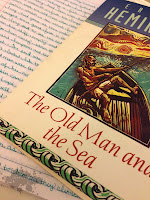 The Old Man and the Sea was considered by Hemingway to be his greatest work. It has certainly endured as such, and is a fine example of Hemingway's signature style. The writing is sparse and unadorned, and often his sentences run on and on, nailed together with a string of conjunctions. He says a lot with a little, and does so without a comma in sight. The stark style works for the type of tale he's building, and the sentences come across as being brave and secure, unapologetic even. There are no nervous adjectives to add insurance to his descriptions. They just are what they are. Only at the end of his paragraphs does the hammer fall, and Hemingway hits us with a pitch-perfect metaphor summing up all we really need to know.

The Giver by Lois Lowry 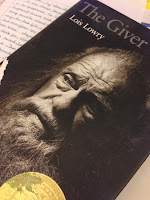 The Giver is a deceptive book. It sits camouflaged in the children's section of bookstores and libraries, pretending to be simple. It is not. There is nothing simple about it, and any lesser writing would never be able to pull together the slow-build of complex and increasingly conflicting ideals that gives the book its payoff. In copying this sample, I was stuck by how many words I saw dedicated to mood-setting. Lowry crafts a scene in which a relatively non-threatening event is described with palpable, growing anxiety. It is almost subliminal how she does it, sneaking in emotional cue words. Hardly even allowing us to notice, she builds a history of fear in half a paragraph, all while developing the setting of a community which has supposedly banished that very emotion to extinction.


Clearly, there is a lot to be learned by studying the works of writers who matter to us. I can milk a lot out of a reading experience if I put my mind to it, but there really is something to writing down their words. It's like trying on someone else's shoes. They probably don't quite fit, but you can still see how they look on your own feet.

This is an ongoing process, and I have a lot more to learn and discover. If nothing else, it is giving me a mighty fine excuse to use my favorite pens and paper, and to wave hello to a few books that have become old friends.


*Paul Theroux, "Paul Theroux on the Powers that Flow From a Pen," Wall Street Journal online, retrieved May 21, 2012

Long ago when I decided I wanted to be a writer, someone gave me this "write out the words of the greats" advice. They compared it to painters copying the works of masters, standard in art school. I did it. Sometimes out of love - I copied the opening sentence of James Agee's essay on the TVA because the sentence, about the course of the TN River, curved like the river; I later found out it's a famous sentence. Sometimes I did it to remember. Sometimes to learn: how did she make that LONG sentence hang together? Sometimes just in homage. On my shelves at home, I have a notebook full of copied sentences. Thanks for reminding me, and for showing how very much you can learn from doing it.

That notebook sounds fascinating, and I bet it is full of inspiration. I have really enjoyed this project, and I think it will become a regular part of my writing world.